It started sometime in 2015, when I moved to a new city and applied for a job at a ghostwriting firm. This particular company wanted to see both fiction and nonfiction samples, as they were busy in both departments. I put the samples together and sent the package over.

They liked my samples and decided to take a flier on me. I was thrilled. The first project they sent me was a lecture about plotting and movies. It was a small assignment, but I worked fast. Evidently it impressed them, because they quickly upped my rate, instituted an incentive program, and then sent me a completed manuscript to edit/rewrite. It was a memoir, written by an international student from Africa, about dealing with her descent into mental illness while living at a boarding school in the U.S.*

[*All project descriptions have been slightly changed to protect the clients’ identities.]

I worked hard on that one. Soon I had earned the firm’s trust, and the projects began arriving fast and furious upon my doorstep. During the next four years, I wrote or edited 40 to 50 different projects.

They were all different.

I never would’ve thought to write about any of these topics if I hadn’t been assigned the projects. That’s what made them so much fun.

The clients varied. There were a few doctors, an unemployed political consultant, some egocentric business types, even a flight attendant. None of the clients were famous, but many were respected in their professions. Some needed a book for their careers but didn’t have time to write one. Some lacked confidence and needed help finishing their stories. For some, English was their second language.

Anyways, during this time, my hands were a blur on the keyboard. In 2017 alone, I wrote over half a million words, which tripled my previous yearly record.

That may sound like a lot, but that’s small beans compared to pulp writers of the early 20th century. Those writers, whom you’ve never heard of, typically wrote a million words a year for the slick genre magazines, some as fast as a novel per week. (A novel was defined as about 25,000 words back then; today, it’s about 60,000 to 70,000 words.)

Not me. When I’m writing, I usually max out at 2000 words a day. That means my absolute yearly maximum, with no weekends or vacations, would be about 730,000 words. That would amount to 12 normal-length novels, if I could swing it.

The point: I have done a lot of writing recently. But you, the public, unfortunately won’t see those books under this name—at least not for 35 years, when intellectual property law allows me to claim them for my own. By that time, those new book sales will keep me well stocked in cardigans, Metamucil, and split tennis balls for the bottom of my walker.

Anyways, it’s all over now. The ghostwriting firm closed several months ago, without warning.

Work-For-Hire Is Nothing New

People find ghostwriting fascinating. I get asked a lot of questions from strangers about it.

Here’s what I know about the field.

First, there’s no reason to think that ghosting is a new phenomenon. Pen names can be seen as a form of ghosting, and many famous writers in history, such as Soren Kierkegaard, used multiple ones. Some pen names are so well known that we don’t even realize they’re pseudonyms, such as Stan Lee, Anne Rice, Barbara Vine, and Lee Child. Even Benjamin Franklin wrote under the pen name Alice Addertongue!

What we call ghostwriting today has been a big part of publishing for at least a century. Early in the twentieth century, a man named Edward Stratemeyer sold nearly half a billion books. (That’s billion, with a b.) He controlled the youth publishing market for decades, and was almost a hundred percent dependent upon ghosts. For example, he conceived of “Franklin W. Dixon”, who wrote all the Hardy Boys novels, and “Carolyn Keene”, who wrote all the Nancy Drew novels. Those two writers never existed. Stratemeyer used those names as a screen for a rotating group of contributing ghostwriters. Today, famous ghosts such as Andrew Crofts have sold millions and millions of books—and the only people who know exactly which ones are high-level editors.

Some readers are appalled that books are not written by the author on the back cover. That’s a bit naïve. Do those people also get upset that Aunt Jemima never existed? Or that the Geico lizard isn’t real?

It’s better to think of an author name as a brand, not a person.

Ghosts have very practical uses. Sometimes, if bestselling novelists freak out or get sick, their traditional publishers may decide it’s easier to call for backup in order to make an autumn release date. I’ve heard rumors that, back in 1998, J.K. Rowling very nearly got replaced on her own sequel to Harry Potter and the Sorcerer’s Stone because she was so late with the manuscript.

Some of these practices seem to be dying out in the twenty-first century. People like James Patterson and the late Clive Cussler are openly crediting their ghosts now, as are many celebrity memoirs. But ghostwriting is like a weed. It always grows back, in different forms.

The Benefits of Being A Hired Gun

Ghostwriting was rewarding. It tickled my brain and heart in ways that writing on my own hasn’t, just because of the sheer variety of assignments.

For example, on my own I never would’ve written a highly self-conscious Jane Eyre set in the rural American West, overlaid with supernatural elements—never—but man, write that sucker I did. It’s funny what a fat wire transfer deposited directly into your checking account can do to stimulate creativity. I’m not joking. Money really is a powerful motivator for art.

Also, in ghosting an assignment, there’s a lot less open space. The client has usually set limits. So instead of wandering aimlessly across a featureless field of pure artistic inspiration, you’re navigating through a tight rocky canyon. The walls are high, and you can’t climb out. You’ve got to pick your way along the bottom of the canyon, all the way to the end—and they need you to find it by Friday EOD. 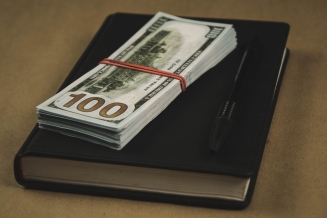 Also, ghostwriting can be lucrative, especially if you can wrangle a percentage of the profits of a breakout book. (The businessman Donald Trump, for example, stupidly paid his ghost, Tony Schwartz, 50% of the profits of The Art of the Deal — without a single negotiation.) That type of windfall never happened to me, though the firm paid pretty well. I was thrilled to be making a lot of money doing something really fun and challenging.

Overall, the experience taught me that being an artist-for-hire is a little easier than being an artist-for-oneself. I don’t think I’m going to provoke much pearl-clutching by saying that either. In fact, the god of highfalutin modernist poetry, T.S. Eliot, used to talk about how much he liked strict poetic form because it removed choice, forcing him to be creative within tighter constraints. The fewer decisions, the easier. It’s why many people, such as Steve Jobs, prefer to wear the same clothing every day.

But in the back of my head simmered the advice of a writing guru named Dean Wesley Smith. A few years ago, he taught me a lot about how to build a modern writing career. He’s also done a ton of ghostwriting projects in his life. Dean cautioned me not to do too much of that type of work, because it can blunt a person’s own original artistic impulse. He himself complained that he never found a really strong original voice on the page because he was too busy being paid to sound like other people.

He was right. It was fun while it lasted — but now it’s back to my voice.

While ghostwriting, I put the Ainsley Walker Gemstone Travel Mysteries partly on hold.

No longer. Here’s what’s coming up:

The Mongolian Moonstone was completed a few months ago. Its release has been interrupted by a short-notice two-week trip to the Middle East, by the arrival of covid-19, and by a monthlong move to a new address. The book is releasing soon, and if you liked previous titles, you’re going to love this one.

The next title, The Easter Island Coral, is halfway finished and was inspired by a three-day trip I made to that remote pebble of an island at the end of 2017. I outlined the entire story on a legal pad during the flight back to Santiago. In three words: obsession, madness, and moais. You’re going to love this one too.

The following title, The Chile Copper, will see Ainsley seeking a copper sextant, a collection of which I discovered at the Museo Maritimo Nacional in Valparaíso. It felt appropriate to use a nautical instrument as the McGuffin here, since that string bean of a nation has over four thousand kilometers of coastline. Anyways, in this one you’ll see Ainsley chasing a suspect across a ventisquero (glacier), joining a group of distance cyclers across Patagonia, and cracking more than a few jokes about the linguistic mess that calls itself Chilean Spanish. If you liked The Argentina Rhodochrosite, you might love this one most of all—it feels like it wants to be pretty long and intricately plotted.

Generally, I’m choosing wild, farflung places. The more unfamiliar, the better. Nobody needs another story about another traveler discovering baguettes in Paris or cappuccinos in Rome. That has been beaten like a gong.

Me, I’ve done a lot of travelling the last few years, but I don’t actually visit all the places I write about. I didn’t go to North Korea, thank God—but don’t hold it against me. Harriet Beecher Stowe wrote the bestselling slavery novel of the 19th century, Uncle Tom’s Cabin, without having set foot in the American South. Stephen Crane wrote the definitive novel of the Civil War, The Red Badge of Courage, even though he hadn’t even been born until six years after the war ended.

On the other hand, I also travel to many foreign locations without writing about them. A week in the Netherlands last winter left me kind of flat. Good beer, meh food, gray skies, but nothing really seemed interesting enough to write about. (Sorry, Nederlanders!) Same with Siberia, which totally defeated my powers of imagination. Even after doing a lot of research, I just couldn’t find a compelling story about that God-forsaken empty taiga.

One thing is for sure—while ghostwriting was challenging and fun, I’m going to heed the advice above and steer myself back towards my original voice.

Thanks for staying with me.

Meanwhile, it’s a big world. Let’s go see it all.

LINK TO BOOKS (AMAZON US)